Took a few minutes today to base up what I have already made, using the lasercut Blockbases. 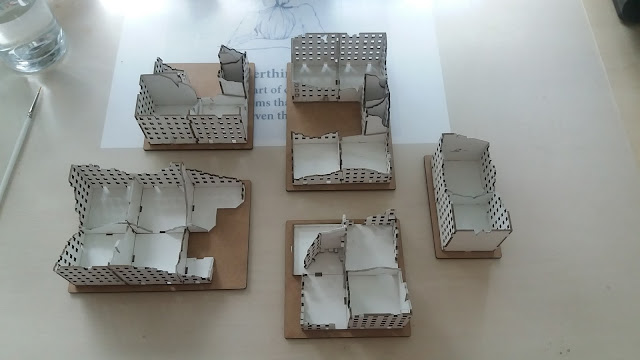 It is nice to see Patrick lasering what I had in my head a few weeks ago. As soon as I feel safe with a blade again (next week? I hope?) I'll cut more buildings and glue them down.

Got an email from Dom at Dom's Decals that he is a bit behind, and my order should ship soon. I just picked some aircraft that I felt like I wanted to paint and went with that (P-47D's, I-16's, Hs-129's and Japanese floatplanes). Was worried not receiving anything almost 2 weeks after making my order, I found that to be unusual. I'm behind on painting airplanes anyway, but yes, life.

Slowly whittling away the stuff on my battletable, put up quite a bit for sale, the rest sorted in the correct boxes and a bit dropped in the bin.

Other then that enjoying my darkend room and trying not to annoy Kim too much. Did install new light fittings in her aquarium, so I did that much. Her fish are all wearing sunglasses now though......
Gepost door Gunbird op 21:07