A praise, a rant, and maybe a small cultist chant

Sorted out a ton of stuff today, for school, family and little bit of the hobby. . Based up all of my Terracotta zombies I purchased at Impact 2017, took a picture of that, then promplty converted the standard bearer into a normal one, no standard (and no hand), as these wilol function as just zombies for a Chinatown or Ronin/Daisho battle.

Just need to base the clipped head from the banner as well. Very nice figures, pity they are OOP.

Picked up my trade box today, with a Academy M35 truck, a Heller 109 B/C that actually does come with a canopy (unlike the last trade) and has the iconic early mouth style intake. Ad a dual seat Skyraider, because..... why not. Only cost me 2 kits and shipping in return.

I also passed my First Aid exam yesterday, most of it went swimmingly other then the imitated torn leg muscle ( never been a sports guy and never had anyone near me have this happen to them, so besides a coldpack and giving them some painkillers there wasn't much I could actually...I just needed to be more confident in my respsonse. Same went for a guy with a painful ear, and it hurt inside his head. No bugs, no hits, just a red ear and pain in his head. I gave him some painkillers as well and told him to see his doctor if it was still the same tomorrow. Actually I was supposed to give him a hotpack for his ear, but just painkillers would do fine too. Bandaging, CPR, AED use, staying calm and informative to the victim, no problems there.

Fun though, sitting in a room full of very nervous people, you could smell the fear :D

But yeah, I passed, and as a gift for me doing so I'm buying a ticket to Militrack for the sunday show and to see actual, functioning WW2 German vehicles. My favourite desert Stug rebuild is coming too, I can't wait to see it live and his Marder next year.

Then we come to my Grubby Tanks order I arrived today. As youy may or may not know, I've stopped buying his resin vehicles as the casting quality is incredibly low. But his figures were fine, with the occasional mould slippage or other casting issue. Well, 1/3rd of this order has issues. Either too little metal, or excessive metal build up on faces and arms, some mould slippage and then there is this  in the Russian officer pack. 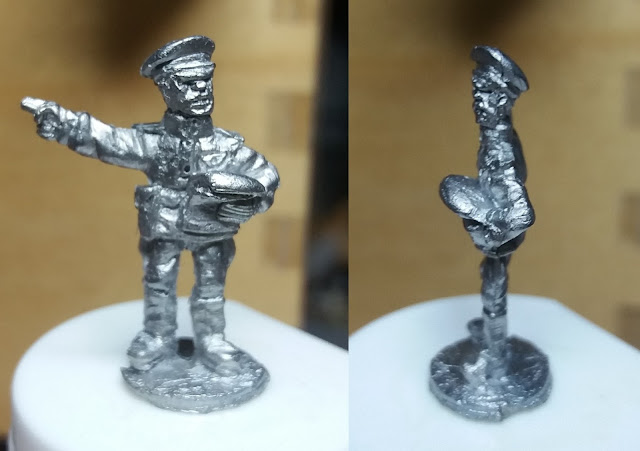 Already emailed him, again, about the defects. At this rate every order I make has defects, and sure, they will get replaced, but this really should not be necessary to begin with.