As I sat here waiting for a reply to my order at Fighting 15's I grabbed some boxes from the cabinet to find my other few packs of 3mm vehicles and found a bag of 3mm aircraft instead. A big bag. I also found all of my Thud Ridge items that I used to demo at shows. In the corner of my eye, at the top of the cabinet, is a collection of Check Your Six! rule and scenario books that I collected a couple of years ago. I want to get back into that, and what better way to push myself is to plan a demo at the next Poldercon? Gives me plenty of time to get things done, find a good convention scenario, paint up the nescessary planes and laminate everything needed. I might even be able to build some scenery, or be able to afford some. Check out this >> Brigade Models
Just 1 slight problem. The bases I have are just for Thud Ridge. Big square ones with a perspex rod coming out of it at various heights, which made it very impractical to pack and store properly. CY6! uses hexes (though the aircraft stand does not neccesarely be that, round is ok too). Back in the day I played a few games using Lego stands, with a die next to it for speed.

Now, I have this thing, I don't know if anyone else has it too, but I don't like dice on the table. Their place is in a dice rolling box that I have, with big walls so that they don't jump out. Dice on the table inevitably get stuck somewhere, hit scenery or miniatures or roll off the table. Seeing aircraft flying around lugging a dice behind them is also not great to look at. But if you want to do this as a demo you will need some kind of marker that is instantly visible to all players. So....in comes Lego.

This is what some people use, as did I: 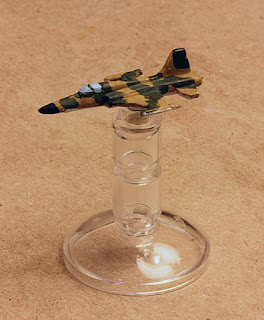 As found on this Blogpost: flight-stands-for-1600-aircraft

You can use as is, and add 1 altitude die and 1 speed die. Or just a speed die and add cylinders for each level of height (which is what I am going to do). I'm going to leave out the dice all together as I have come up with a cunning (and cheap-ish) plan.

I have a account over at Bricklink, where you can buy every bit of Lego ever made (for a price). This is because I helped out a creditcard less friend back in 2010 who wanted some Lego and I used it late 2013 when I needed Lego parts to make boxes for moulding Oyumaru. If you select the sellers from your country only AND focus on used items you cut back on the (shipping) costs, so I did just that. And then I went searching for transparant cylinders. These sell for 11-15 eurocents per pop. While this looks nice, it does make it harder to see the altitude, so why not use black - transparant - black etc? Used black ones go for 4 cents each. I then thought to myself, in CY6! you have 4 levels of pilot skill (green, trained, experienced and ace), why not give these a colour and use that colout for the first (and third, and fifth etc) cylinder so players instantly see what level pilot what plane is. As it turns out, red (ace), yellow(green) and blue(experienced) set me back 40-60 cents each for sets of 20. I picked up enough white and black ones to make 20 stands of just those, plus 20 neon green discs at 3 cents a piece. (why neon green? Because they were the cheapest) I plan to glue them down onto Warbases.co.uk 30mm casualty markers and cover them with filler and then either flock for Europe or paint them sand for Iran-Iraq and Israel vs Everybody else. 30mm round base fits nicely inside the hex mats that I have. The casualty marker then becomes my speed indicator, it goes from 1-12 which is way more then I need so that will suffice.

So, I now have a easy to work with flight base, relatively inexpensive, made from easily available materials. In the future I can always swap out the multi colour flight levels for transparant ones if people know the rules better, but for the purpose of teaching they are brilliant.

As soon as the casualty markers arrive, I will prep and paint them so you can see what I mean. I also added 20 pcs 1x1 round studs to my order that I can sink a magnet into so it is easy to mount and dismount the aircraft, like in the old system. I'll do 10 of them European woody style and the other 10 with a sandy desert base. If I need/want more, Warbases will be at Crisis and they have a show order pick up discount, so I can wait till then....it is not like I will be attacking maases of B-17's over Europe anytime soon. 10 aircraft in a game with 2 players is more than enough to keep us busy I think and for a demo 2 aircraft per player sounds about right. The vehicles I'm working on now can become juicy targets for jet age and by then I think I will have found something for WW2 as well.

Now, 3mm scenery. Brigade sells it, some very nice stuff too, but just a few villages add up quickly so that is unfeasible for now. That leaves hills, forrests, lakes and swamps etc. Dead easy to make, I once made 2 green hills for Thud Ridge and that was just some flock covered foam. I will enjoy scratchbuilding that. Of course, the senics for 3mm landwar need to be bigger than the 3mm air war targets, but that is no problem.

But all of this can wait. I'm on my last week at work and starting next week I will spend a lot of time cleaning out my storage space at my old flat, I'll most likely bin a lot but save as many miniatures as I can, and cancel the lease asap. That will be 60 euros a month better spent somewhere else. After that I will get cracking on switching the hobby and kids room. I made a head start by cleaning out the 2 cabinets of Kim and I shifted all of her books to the attic....must have been 250 kilos of books alone! (and she never reads hem!). I'll try to move the cabinets to the attic later this week but my knee might not agree with that. Speaking of which, X-rays showed nothing, next up is a MRI at the end of March and the results will be in early April, and then I'll know what the prognosis is. The company doctor today signed me a paper that I'll be leaving work sick. That means the company gets a fine, but that's not my problem. I've got other things to worry about.