The scenario I have selected for the Poldercon CY6! mission is "Old Crow". This is from the original rulebook. It desribes a mission by the 363rd Fighter squadron flying P-51B's, escorting B-17G's on a bombing run to Leipzig, being attacked by Bf-109's and Fw-190's. Things like spotting, visibility, sun side etc will not be used for the demo game, this is purely for flying and shooting.

What I need for this game is the following:

After checking my extensive collection I find that the Germans are not the problem, they are easily covered. The Ameican side however is a problem. I only own 4 B-17G's, and 1 of those has the underside and top turrets filed down (what was I thinking??) so that is useless. I'll need to order 2 packs of those (ISA 280b at 2.80 Pounds per 2). Strangely, I also do not own any Mustang B's ( I could have sworn I had a few) so those will need to be ordered as well (ISA 283a at 2.00 Pounds per 6) but 1 pack of those will suffice.

After checking tons of planes I noticed that quite a few of them already had magnets drilled and glued in place, but worryingly half a dozen or so had shattered magnets, where the outer layer had peeled off and the magnet itself seems to have disintegrated? A few aircraft had small nailheads in the underside, which might be a safer bet as replacing a shatterd magnet from inside a painted aircraft is a nightmare, where the magnets from the flightstands are easily replaced. The nailhead would also help with hooking on the smoke trail for an engine fire. I'll go have a look for a box of small nails at the DIY tomorrow, can't be too expensive at the Hornbach in Tilburg where I have to be tomorrow to get started on clearing out the garage.

Painting wise I will start with the 2 German sets, see if I'm not missing any suitable decals and if so, order those along with the American planes when and if I have the money. I will paint them the same way as I'm used to, in pairs with the same scheme, but different numbering and/or prop colour. Old Crow and friends are easy, tons of info on that scheme for any particular date to be found, including D-Day schemes (always nice). 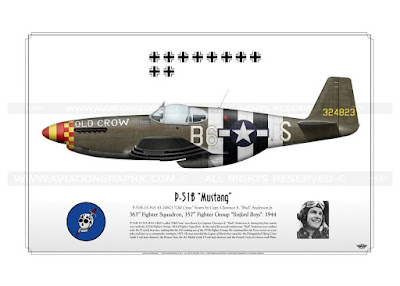 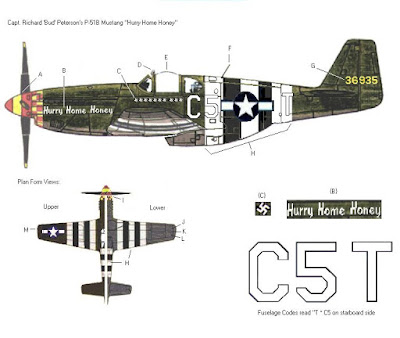 Which ia great scheme for the first flight, and to diversify I'd like to use another Fighter aquadron (486th) and go with this scheme: 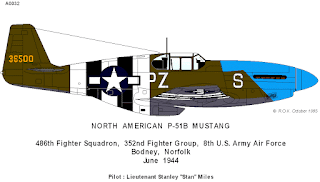 Easy to see which group is which.

For the 109G-6's I think I will go with this, easy scheme for later war as well even if this one is missing the nose bulges.