Right, first test game in the pocket and it is safe to say Erik and I are hooked.

From the start, including set up of scenery, to the final roll of the dice took us less then 90 minutes. We are both experienced gamers and the game isn't complex so the basics were in our system before the first turn had ended. We really like the unpredicatbility of never knowing you will get to activate someone again. Erik was rolling 20''s like they were free (we had brought the wrong dice by accident, so the 20's were actually 10's of course) in the first half of the game. Later on, not so much. But more about that later.

First, the set up. Basically all we have right now that is suitable. 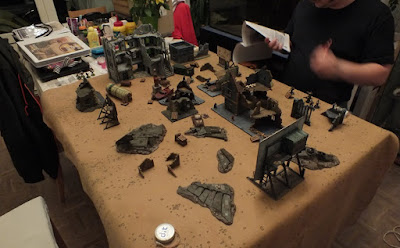 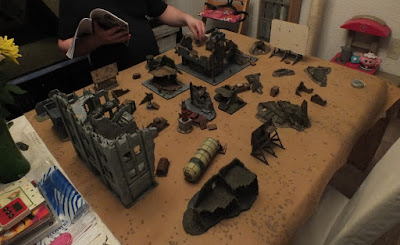 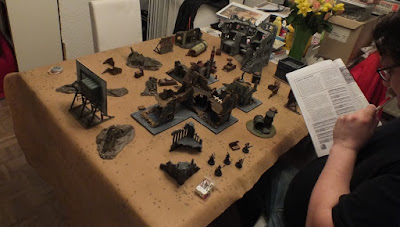 Nothing too open, but not too built up either. My mat is a Desert Hotz mat with airbrushed rocks, works well for now.

My band of Peacekeepers (actually Necromunda Cawdor), pretty much WYSIWYG apart from the juve with a knife and pistol...he had no pistol. The leaders bolter counted as a submachine gun (well, a very big one)

The game had some very tense moments. I rolled terribly for my activations so didn't get very far at first, but then Erik started to fail a few and I killed one of his mutants with a mid range shot. I then managed to move my men up and my knife guy actually made it to the water heater and in his next turn managed to spike it for 1 AP. My boss then joined up and he spiked the remaining 1 AP. I then took a casualty as my shotgun was taken out of action and then the Mutant flamer made a bold move and managed to hose my knife guy and my leader. Knife guy died, the leader was miraculously missed. He then moved his leader 1 inch away from mine and hosed me with his assault rifle....and missed (thank God!). My leader switched to his light weapon and returned the favour by charging him and was greeted with a electric shock....that didn't hit. He managed to score one wound on the mutant leader that then rolled a 1 for his morale test and he was gone. My assault gunner then moved up and shot down the mutant flamer by hosing him with rapid fire (with 1 measly hit), only to be killed in the next round by a Mutant shooting from high up cover. My leader then moved back to the water heater and filled his jug. My rifleman was taking pot shots across the table with the mutant on high ground in cover and didn't manage to hit anything, so I had hoped to move him towards the water heater for another jug of water but a tring of activation failures meant he never made it there and my leader left the table with the water. Eriks men retreated too, even after passing his 50% and 25% bottle tests, but they just decided they would have none of it.

So, a win for the victorious Peacekeepers. 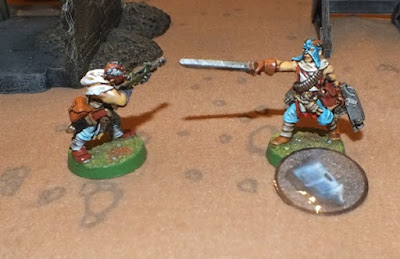 And a loss for the remaining mutants....or was it? 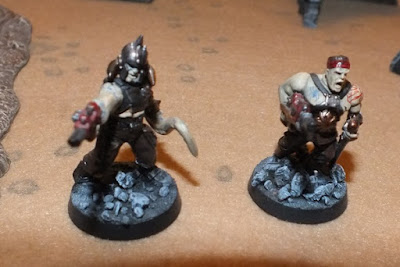 Purely on VP's I scored 7 vs Erik's 3....a win. But playing this game is half the fun. the other half is seeing who lives and dies and then the exploration phase.

So, Erik's leader had a Close Call, and his flamer and submachine guy were both Banged Up.

I on the other hand had a Dead shotgun guy, a Lucky Break for knife guy and a Close Call for the assault gunner.

Experience wise we had the following:
Erik's Mutants
My Peacekeepers
So, a win on XP as well.

Then we went exploring.

Oh FFS...not only does he have more people that can explore, he finds way more bottlecaps and he pulled a face card (Ace of Hertas - you find a offline Depend-o-bot) and he passes the test!

Erik's Mutants earn 51 Bottlecaps and a free robot! He must spend 10 BC for his upkeep.
My team collects 36 Bottlecaps, and I must spend 6 BC for my upkeep, but I will need to rehire another guy.

So, all in all, easy to learn, deadly, no endless dice rolling or that GW "tons-a-dice" crap and the leveling and exploring is just the cherry on top. I think this introgame can be played in 60 minutes if I give the players the following:
Which then leaves 30 minutes for discussing the game and showing how the experience goes and how much fun that part is.

All in all quite happy. Still plenty of time to get the scenery sorted out, custom pieces made (the central 4x4 inch (or bigger) ruined building with the water heater) and lot's more scatter scenery. Pat's pallets worked really well scattered on the board.