I don't know how it works with you guys, but sometimes my brain gets an idea and then a wild rollercoaster of crazy ideas, frenzied work and noting down future orders, and the next day you think how the hell did that happen?

Recently, I had such a chat session with Modhail, in which we discussed Crimson Skies, how the game had died many years ago, how we had built several 1/72 conversions and it all fizzled out, but has never really left our heads. So, since I'm working on 3mm stuff, he pitted the idea of 3mm stuff vs his Revell Zeppelin. Start the rollercoaster boys :). What would be a good airplane to demonstrate the possibilities > Go for a fighter or a bomber or a transport plane > What would be a famous pilot > Han Solo is famous > He flies the Milennium Falcon > What would a light transport look like if it was used by a smuggler > Flying low volume expensive cargo > Must have twin engines and a turret for self defence > Be very maneuverable > What 3mm aircraft do I have that I can scrap for this?

After a short period of converting, and a few nights thinking about the scheme, and why it is what it is, I got there in the end. 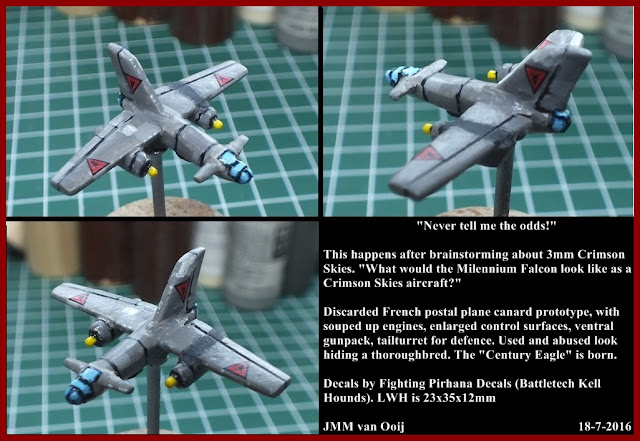 FFW a couple of days later, Battlegroup is having a poll and Stalingrad as a book is on top, Stalingrad > Sad movie > One of the sadder moments is the plane leaving and the guys being left behind > The plane is a Ju-52 > I've got one built and primered > Hey, look at these barely fitting Red Cross decals > Painting time! A target is born. N for Nurse. 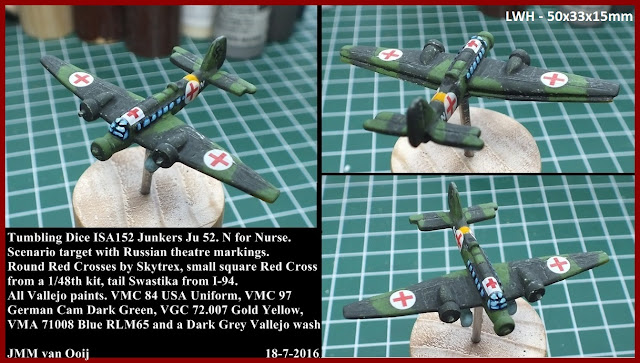 Sometimes it is just that easy to find inspiration.