After posting my previous post lastnight, I went out and made a Bergepanther as well.

Then went and built a Regelbau Pantherturm for a non-city environment (Italy, Germany) 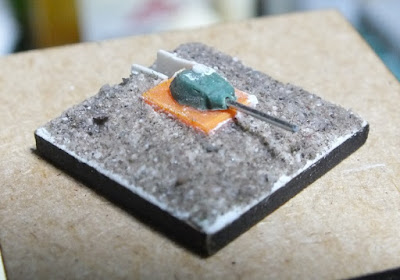 Then based up 4 Panthers, 1 Co and 3 regular ones. One is actually a spare for a bigger game, as in Battlegroup the unit is normally 3 tanks (1Co and 2 regular ones). Now I need to get some Greenstuff and make 3 more casts for the 3 wrecks that I want to build, then get everything basecoated and paint it all in one go.


Now, since my book is in storage *somewhere* I pcicked up the Panther pack as a test to see if things clicked for me. And yes, they do. Since Modhail likes the desert, I've decided to focus my attention to the upcoming release of Battlegroup Afrika, and guesstimate what I need based on the previous books. So I need to sort out Infantry, trucks and armour. Artillery bases, as they are usually offboard for me, can wait till next time. Sofar I have 15 euros in the pocket for my budgetted 50 euro order, so I need to get my thumb out and find more stuff to sell.

But, I'm not going to splurge or anything. I want smal to mid point lists, 4 per main battle tank, 1's of recce vehicles, enough trucks to transport troops and have supply trucks as well, 1 platoon of infantry with all options, and all of the air support choices available (but that is never more then 2-3 aircraft and maybe a bomber). The handy thing about Oddzial Osmy packs is that they (usually) have 15 of the same vehicle in the pack. So3-4 for the desert, 3-4 for early war, 3-4 for Winter war and spares for Late War oddballs (well, this applies to the Germans only of course). If I still have too many of a certain vehicle I can always trade them with others.

So, on the buy list is:
Anything else is for next time. I've given myself 2 months to clean, base and paint the 2 mainforces (aircraft and wrecks can come second this time). For now, I can get a head start on painting the houses and basing them up.