Groundbreaking work today. Well, 3mm groundbreaking anyway. In my last Fighting 15's order I picked up a pack of 3mm Panther G's, and I moulded 3 of them today, and cast 2 whole one s and 1 with half a hull to make this conversion.

20mm square base, middle of the engine bay cut out as I did in my 20mm scale model so the crew can enter, copied off a pic from Berlin or one of the other cities that I lost ages ago. Piled dirt up around it and some bigger tiles, now looking to add a single roadwheel and expended shells using my die punch and lenghts of wire. The muzzlebreak I will paint in. New hatch added with die punch as the original was too tall with a MG. 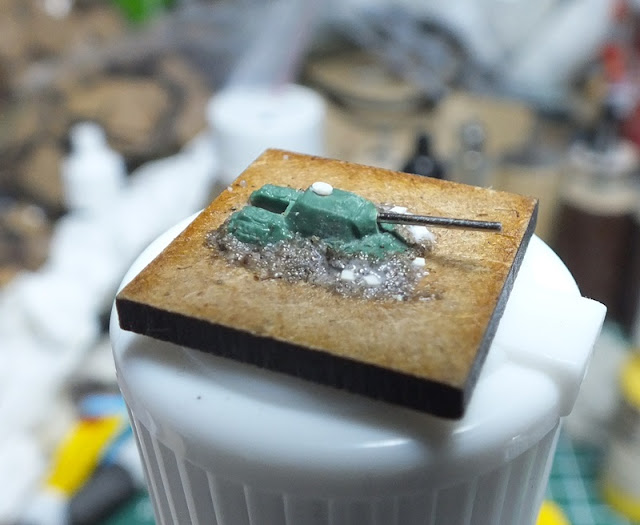 ....has caused me plenty of headaches sofar. As these will be used to skirmish Battlegroup with Modhail, I've thought about adding a label to the back. This worked quite nice with my 6mm and my 1/3000th Navy, but I don't like it. You are only looking at about 20-30 units per side, give or take, so I have decided to do labels, but to put them on the underside of the base. If you are really afraid you have mixed things up, you can always pick it up and look at the underside. Same for infantry, but they will get colour coded on the thickness of the end of the base.

Should be dry in a minute or so, will basecoat it before going to bed, just need to do the roadwheel and empty shells first.
Gepost door Gunbird op 22:58